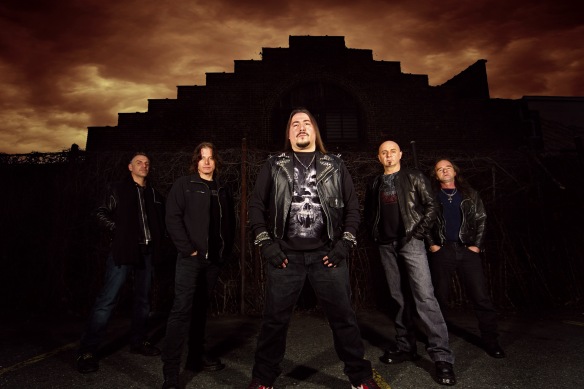 With “Giants Of Canaan”, New Jersey based veterans ATTACKER has delivered what might be their best album to date. A killer slab of old school metal topped with the awesome vocals of newly recruited singer Bobby Lucas. Metal Squadron hooked up with original drummer Mike Sabatini to get the latest information about a band that recently performed at the Metal Assault festival in Germany. With limited playing time, was it difficult to find the right mix between the old classics and the fresh and exiting material from the new album? How do you feel about the idea to release a brand new album at festival like this?

– One thing we have always done, is to make sure we represent songs from each album at our shows. From a fan point of view, no one wants to hear all new songs so we try to pick what we feel are the favorites of the fans and give them a good show. It does become increasingly harder the more albums you put out of course. I think it was a great idea to release the new CD at the festival. We had not been there in almost five years and have not had a new CD in the last seven years. It was definitely an awesome “record release party” and it could not have been at a better place.

You described the break before you added Bobby to your ranks as “long, but well needed”. Why was it necessary for the band to charge some batteries at this point in time?

– At the time of us taking the break back in late 2008, the atmosphere in the band was a bit strained. I guess all the tensions with Bob Mitchell (ex-singer) and the fact the there were some personal issues that the guys had to deal with, contributed to us needing the break. Looking back, it was the best decision we could have made and that’s why we are back today, stronger than ever.

The already mentioned Bobby is a vocalist with a voice that suits the ATTACKER-sound almost to perfection. As far as I understand, he was the one who contacted you. What did you know about him when he approached you? Did you know his work in Overlorde and Seven Witches for instance?

– Yes, Bobby did contact me at the urging of Mark Edwards from Overlorde. I had heard his CDs with Seven Witches and Overlorde and I had met him at the KEEP IT TRUE fest in 2005, so I knew full well what he was capable of doing. He absolutely fits ATTACKER’s style and sound and we are very happy to have him on board!

Apparently you were close to giving up because you couldn’t find a suitable singer. Why was it so hard to find a vocalist for ATTACKER? Before you got Bobby on board, you had two other singers for shorter periods of time. Did you consider them to be permanent vocalists in Attacker at the time, or more as short term solutions while you looked for the right guy? Why didn’t it work out in the long run with Walter and Anthony?

– We did think about calling it quits, because ATTACKER needs a certain type of singer and they are very hard to find these days, it’s a dying art form. We did have two other guys who ultimately did not work for us. Walter came in right before the break we took so he was there at the wrong time and it just would never have worked because of the bands’ internal stuff at the time. Anthony also was trying when we were not really ready to re-group plus, although as a person he is a great guy, vocally he would not have worked out in the end, I believe. Neither Walter or Anthony was looked at as a short term prospect though things just could not happen with them. The break was absolutely needed for us to survive.

Compared to Bob Mitchell, Bobby has a voice that is a bit different. However it doesn’t really sound like you have adjusted your way of writing songs to fit with Bobby’s vocals. Did the music and his voice melt together without any problems at all?

– Yes, Bobby has his own voice and style that is different that Mitchell’s but is still similar in some respects. We just wrote what came naturally and Bobby put his stamp on it. We did not change anything to suit his vocals, it all just fell into place, with no problems at all, as you said. It worked perfectly right from the beginning.

On the new album there is a song called “Steel Vengeance”, which, as far as I understand, is a reworked version of the song released as “Condemned” at the Keep It True festival back in 2008. Does this imply that you weren’t fully satisfied with the first version of your song, or is it common that you work on different “drafts” of each song?

– The song musically is exactly the same as the “Condemned” version. We wanted to use the song but since Bob Mitchell wrote the title and lyrics, we did not feel comfortable using his work and gave Bobby his first opportunity to write with the band. We were always completely happy with the music.

The band constellation that is ATTACKER these days, is pretty interesting, of course you have original members like yourself. and Pat onboard, which I guess both are essential to the band. Since 2001 you’ve also got the talents of Mike B. in the band, and I think his role is quite big too. Last but not least, you have two newer recruits in Bobby and Jon. Some old members, some new, and Mike B., in between. Seen from the outside, this often works better than bands recording in their original line up?

– I would say that myself and Pat have been the glue keeping ATTACKER going all these years. That is why we can have other members come through but retain our signature sound. Mike B. has become the main songwriter and has been on three of our five albums now and essentially, along with Pat, makes up the definitive ATTACKER guitar team. Now with Jon Hanemann on bass and Bobby on vocals, we feel we have the strongest line-up we have ever had. Our old bass player Lou Ciarlo has said to us that this is the best ATTACKER has ever sounded, and that says a lot coming from an ex-member!

2013 marks your 30th anniversary as a band. Even though many years have usually passed between the release of each album, you have never changed your sound much, and in my head that is definitely something you should be proud of. Have you ever held discussions about your musical direction at all during these years? How have you managed to stay true, even though musical trends has come and gone?

– We have been lucky in that we never tried to sound as we do, we just write what comes to us. We have been blessed to be able to maintain our roots. We have never discussed it, it just happens and we are very proud of that fact. Many old school bands put out records that can’t live up to their earlier stuff but we have seemed to be able to achieve that. I can’t really say how it happened to be, but we all know what ATTACKER should sound like and I guess that helps us retain our focus.

Are you still in contact with your old singer Bob Mitchell? In a time where there is a demand for concerts with as many original members as possible, do you see the possibility of working with him again, at least in a live setting?

– Bob and I no longer speak unfortunately. There was a lot of bad blood between us. I recently tried to reach out to him at a Sleepy Hollow show but he turned his back to me and I will not tolerate that show of disrespect. I personally will never work with Bob again. He burned the bridge between us and it cannot be repaired in my estimation.

The three albums you have released after the reunion, have been on different labels. Just a coincidence, or does it reflect the fact that you have simply signed contracts for one album only, to have a certain kind of freedom and no pressure to come up with new music?

– It is really because the labels like Iron Glory and Sentinel Steel were inactive at the time of each new release. We did sign contracts for one album at a time. It does not really make sense for us to sign multiple album deals for a band like ourselves. It does give us more freedom and less pressure as far as time frames for getting new music done.

You also have a new bass player, Jon Hanemann. Where did you find him? Is he also a veteran, or is he younger than the rest of the band members?

– Jon was at the right place at the right time. When we reformed ATTACKER last spring and Lou decided not to continue with the band, Jon and I were playing with a guitar player in our studio and that project was not working out so I asked Jon to try out. He did and kicked ass and got the job! He is actually in our age range but he has not really done anything band wise of importance before, despite being an amazing player. He is a great addition to the band.

How do you view “Soul Taker” and “The Unknown”, the two albums you released after your comeback in retrospect? How do you feel they stand measured against your two releases from the eighties?

– “Soul Taker” was the album that we used to help start to regain our way in regards to writing music again after 20+ years. It was an OK album, my least favorite among our albums. “The Unknown” saw us back on track and was a much more solid and focused album in my opinion. “The Unknown” measured up better to the early stuff than “Soul Taker” does, I am sure most would agree.

“The Glen Of The Ghost” is a surprisingly melodic song with a Celtic feeling. Did you decide to place this one as the last track because you also felt it was a bit different? Overall, I feel “Giants Of Canaan” is probably the most melodic album you have done.

– “The Glen Of The Ghost” is definitely a melodic piece and the music has that Celtic feel. That is why Bobby wrote the song about the legend of the banshee haunting the glen in Irish folklore. We felt it just fit as the album closer, it felt right for it to be there. I think “Giants Of Canaan” is the most melodic more for the vocal melodies that Bobby came up with. You can sing along with almost every song and that makes for a memorable album in my opinion. I guess musically is has its melodic moments as well. Again, it just happened that way, this is what the guys were feeling musically at this particular time.

The reviews for the new album have been very impressive. Does this give you motivation to hit the road and also to make another album as soon as possible?

We have been very pleased with the reception the new album has gotten thus far. It definitely makes us want to play as much as we can here and overseas. We have a good amount of shows planned and will do what we can to play different places that we have never visited before. And yes, the guys are already writing music so we don’t wait another seven years for the next record!!! We hope to do a new album for 2014! Thanks Leif!!!