1. IRONSWORD ”None But The Brave” (Shadow Kingdom) 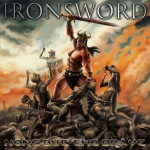 – First impression: Very good, but better than their two last masterpieces? I don’t think so.

– Out of the blue. A raw demo recorded  pretty much live in the studio.  Three strong songs in the vein of the material on “We March Forward”.

– Not exactly metal, but haunting stuff with the unique Adramelch-atmosphere. A real shame it’s their last one.

5. NIGHTMARE ”The Will To Overpower” (Lethal Loudness)

– Straight ahead heavy metal with absolutely no major surprises (except a few peculiar song titles). I need that sometimes!