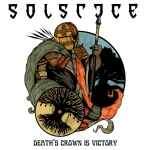 – What an improvement on the EP! Raw, epic and heavy. It doesn’t get more metal than this!

– Just getting to know this, but it sounds really impressive so far. Those vocals!

– Great follow up to “Evil Nightmares”. Love how it turns from NWOBHM-worship during the first songs to a more US metal approach towards the end.