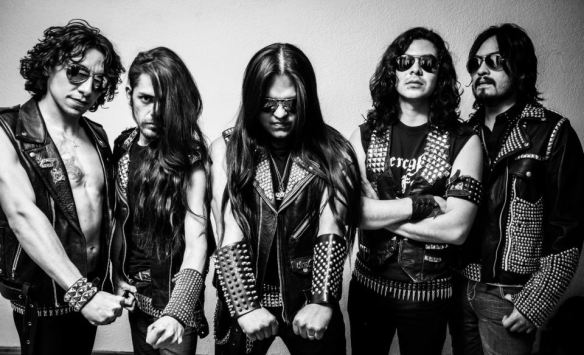 As long as it lasts and as much as it’s worth, “Hiding Into Flames”, the third album from Mexican band Voltax, is a historic release. It’s historic because it’s the album with the highest score here at Metal Squadron since I started reviewing albums a few months back. Not the greatest achievement in the world, some might say, but don’t forget that they’re competing with some great new releases from bands like Asgard, Warlord, Vigilance, Visigoth and Night Demon. I am also pretty sure that “Hiding Into Flames” will feature when it’s time to make my personal top ten of 2013. Reason good enough to hook up with the band for an interview focusing on the history of the band as well as the brand new album.

Let’s start with the name of the band.  Through some research, I discovered that Voltax is the name of an old German transistor battery as well as the brand of some capsules that apparently help sensitive nerve cells function as they should. Why have you chosen Voltax as your band name, and what kind of meaning doe the word have to you?

– There is really not a big story behind the band´s name, says guitarist Diego Magdaleno, who points out that he isn’t an original member of the band.

– What I know, is that it came directly from the word “Voltage”. Playing heavy metal with high levels of energy has been a constant since day one for this band so it seems that Voltage could be the name. However, it was too common, there were tons of bands with that name, so the small change for the X made it for the band back then, and gave the name a little more personality. Of course they didn´t research for these things back then,we discovered it almost three years after the band started. Voltax means a lot of things nowadays, for us it’s the most powerful weapon to shoot high doses of heavy metal into ourselves as well as the people that enjoy listening to our songs.

After some members came and went in the beginning of the band’s career, you have managed to keep the same line-up since the last album, “Fugitive State Of The Mind”.  How important has this been for the development of the band and the sound of “Hiding Into Flames”?

– Since the first rehearsals with the current lineup, we realized many things which showed us it was the correct one. We found a better understanding between the five of us musically speaking,almost as reaching the final answer in solving a puzzle. There is a better flow of ideas between us and we have now reached such a level that we don’t use that many words when we are creating a song in the rehearsal room. Plus the way our stage precense improved with each show was the final sign to keep working like we are now.

Three years have passed since Voltax released “Fugitive State Of Mind”, but Diego says it wasn’t planned for the break between the two albums to be this long.

– Not really. It was a combination of several factors. Between shows and promoting the album, we didn´t focus that much about recording new stuff. We wanted to make the live thing our priority especially when we had big shows coming up . We also realized that giving the new songs some time to mature would be the best in the end. Sometimes the lack of time between us because of personal reasons didn´t help either. We wish we could rehearse more hours a week but sometimes is just to difficult for us. In the end we just had to be as patient as possible since this came out for the greatest good. Last year we totally dedicated ourselves to the new material, and now you can finally hear and feel that with the new album out.

You recorded a demo back in 2011. What was the purpose of this recording?

– The main purpose was finding a label to release “Hiding Into Flames” in 2012. Unfortunately, it  took  a bit longer than that, and unfortunately very few labels showed an interest. We didn´t make any copies of the demo, but it´s very possible we could add the songs as bonus tracks on another release. Maybe a 7” would work fine? But then again ,we need to find someone interested in releasing it.

All songs from this demo are also to be found on the new album, but it looks like we’re talking about re-recordings.  Did you change anything about the songs or arrangements before you recorded the album?

–  We totally did it, the solos were arranged differently, and we added some Hammond on “Obsession For The Dark” for example.  The rhythm section is tighter as well and we changed and improved some vocal melodies. We did everything we could to upgrade those songs so no one would get bored about them and on the contrary, could find some new elements in them.

I have to say I am really surprised by the quality of “Hiding Into Flames”. For me it’s one of the best albums of the year. In my opinion the songs and the performance (including the vocals) are much better than on the last album. Diego places emphasis on the fact that the members have had time to develop their skills on their instruments.

–  If you pay attention to songs like “Hiding Into Flames”, “The Vision” or “Magick” there is a “jam feeling” within the songs. That´s something we tend to do in our rehearsals a lot and it has helped us big time. Without really aiming at it, we developed a sound where the classic twin guitars aren’t doing the same thing all the time. That’s coming from our late sixties and seventies influences. Me and the other guitarist (Matt) can express our different personalities in our way of playing, a thing we had not mastered on the previous album. If you pay attention to the guitars in a song, you can notice they are doing different things most of the time, that’s something I haven´t heard that much in other bands nowdays playing heavy metal .

The new album is released by Sade records in your home country first, and foreigners can order it directly from there. As is the case with most releases from bands outside Europe, there is often an European version released later on with bonus tracks and sometimes new artwork. Do you think this will happen with “Hiding Into Flames”?

– That totally has to happen! In fact, we have started thinking about a good cover song with a special Voltax touch to include on an European version of this release. We have been delaying this a little bit since we have been working a lot on promoting it in Mexico first, and since we are almost doing it by ourselves, go figure why things are a little slow for us right now!  If we use a diffent cover, it will be one of the artworks within the booklet. We love them all and they all represent “Hiding Into Flames”, but are done by different artists.

Europe is a big market for pure heavy metal these days, what are the biggest challenges for a Mexican band trying to establish themselves in Europe? Strikemaster is the only Latin American band I remember having seen at Keep It True. In your opinion, is it about travelling costs , the quality of the bands or are Latin-American bands systematically overlooked? Or are there perhaps other reasons?

– There is little promotion of Latin American bands in European countries as well as in the USA and Canada. There is very little interest from promoters in these places, some because of the financial issues. We know it can get very expensive to make a tour for a Latin American band in such places and that is no business at all, which is the main view most of these people have. Some other promoters just don´t care about checking out bands like us. I don’t have a clear idea why this is, but they are missing out great things and I´m not talking just about us. It seems that bands with a similar background to us, that don’t have a big label and a booking agency helping them, need to have good contacts with people making shows and festivals in Europe, or otherwise its very hard to make things happen. We will start saving money though, as we need to make Voltax conquer over there in one way or another. Nothing has stopped us so far.

From some of your posts over at the The Corroseum-forum, it seems you feel that Latin American bands are overlooked in favor of European and American bands. Do you feel that fans are more critical towards yourself as a Mexican band compared to bands from countries that are more known for producing new heavy metal-acts like for instance Sweden?

– Honestly I get a little bit jealous when I see how much recognition in so little time, bands that started later than us have gained. However, it gets cured quickly everytime I play and listen to my own music. In other words: A part of me sometimes tells me we are not getting the recognition we deserve, but the other side of me is just happy and up for the challenge. Heavy metal is also about having to struggle against conformity and we don´t regret being Mexican cause that´s exactly one of the things that makes us sound so different from other more famous bands from our generation. We do get overlooked and maybe it has to do with a stereotype thing,which is not really a problem once we get on stage, where the true power to convert just any person into the Voltax cult lies. We have had just two opportunities outside of our country and we came back from both triumphantly, so it’s a matter of having a chance to play outside so all those unbelievers can realize what we are about.

In 2011 Voltax got the chance to perform at Wacken Open Air, and later that year a DVD was released documenting the band’s performance.

– Wacken has a metal battle going on every year,where many countries around the world participate. We won in Mexico and had the opportunity to play over there, we ended up in third place just having a French and a Israeli band in front of us. All in all it was a great show. Wacken gave us the official footage and a good friend of us edited a video with that footage plus other fragments of videos taken by him and other Mexican friends that came with us. It has material not seen in YouTube or among the official Wacken footage. We tried fixing the sound as much as possible as well. We made a very limited run of the DVD and now its completely sold out…

Back in the late nineties Wacken still had great bands on the bill, but nowadays it’s almost only bands from bigger labels and also the same, safe bands year after year. Did Voltax feel comfortable at a festival like this? Personally, I haven’t been there since 1999.

– The lineup was okay, at least we saw great bands like Tokyo Blade, Warrant and Judas Priest, but yeah Wacken is fucking Disneyland for “metal heads” nowadays. Plus it is stupidly expensive…