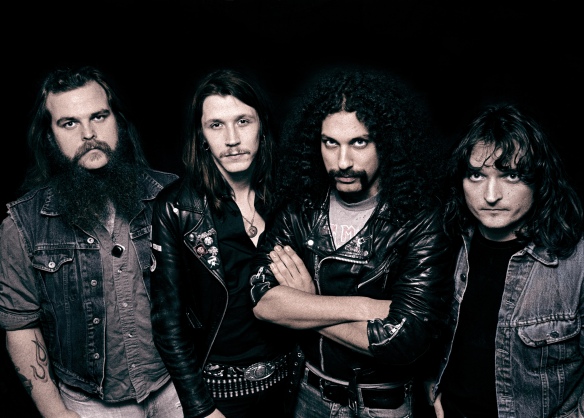 When it comes to seventies inspired hard rocking stuff, in the vein of UFO and Thin Lizzy, Vanderbuyst have already proved their worth by releasing three albums, ranging from solid to very good. Sweden’s DEAD LORD, which tested the waters with a 7 inch last year, is ready to unleash their first full length, and it’s a damn fine one. The title? “Goodbye Repentance”. The band was formed only last year, but I believe main man Hakim Krim, has had the musical vision for what became DEAD LORD in the back of his head for a while. Which factors made him wait until 2012 before he finally could realize his idea?

– Mainly it was due to the fact that I was playing in The Scams . I lived in Växjö, a small town in southern Sweden, at the time, and finding the right musicians for DEAD LORD there turned out to be tricky. Nor did I have the time. Eventually I decided to leave The Scams and move to Stockholm to get DEAD LORD going. Adam (Lindmark, drums) and Olle (Hedenström, guitar) were musicians that I’d met while on the road, and I convinced them to start up DEAD LORD. After only one month as a band, we decided to hit the studio.

While the other members are quite well known in metal circles,  from playing in bands like Enforcer, Morbus Chron and Sordid Flesh, your name is brand new to me. Tell me a little about your own musical background. Do you have diverse set of influences, or are you mainly a hard rock guy?

– Like I mentioned earlier, the last band I played in was The Scams. I guess you could say that I’m mainly a rock guy. At least that’s what I’ve been busy playing. When it comes to listening to music, I’ll go for anything between Slayer and Otis Redding.

Talking about the other members, why did you decide to build the band around musicians already involved in other bands? Are they old friends, or was it important for you to get musicians with a bit of experience on board?

– They all are people I’ve met on different gigs and festivals. They all are great musicians with their own playing style, and that’s what’s most important. Tobbe (Lindkvist) is not just a bass player, you can really hear that it’s Tobbe that’s playing. The same goes for Olle and Adam. They are also nice and cool dudes, and that’s equally important.

Talking a little bit about your first release, the single “No Prayers Can Help You Now”- was there even one review of it where the words Thin and Lizzy weren’t mentioned? How do you feel about the fact that the press thinks your musical expression is so closely linked to one particular band? Do you think it will change with the release of the new album?

– Well, there are a thousand bands out there that sound like AC/DC with a strong rythmic riff-based music. And noone really thinks too much about it. There are very few bands that play seventies twin guitar rock. I think that is a fact of why people at first instantly think of Thin Lizzy when they hear us. They were THE twin guitar, seventies rock band. It’s not like it’s a bad thing, and after all, I’m quite the Lizzy geek, but I do not set out to make Thin Lizzy songs. I write music that I think sounds good. If that then happens to be a bit Lizzyish, then so be it. It’s still rockin!

What was the purpose of releasing the single? To test the waters and see if there was interest for out there for a full album? With only two songs on it, do you feel that you are able to show a bit more diversity with the album?

– Having quit my last band, I felt that I didn’t want to become lazy, so I hurried up with everything. Luckily for us, our friend, Ola Ersfjord, a studio guy was in town and wanted to record something. We got a day in Dustward Studios in Stockholm, and decided to record two songs. By then we had only been a band for a month, and only rehearsed as a complete band for like three days. We hit the studio and got the recordings done, and didn’t really know what to do with it. Eventually we decided to release it via High Roller Records. And to me, releasing a 7″ after just a couple of months as a band, is quite
all right. We got great response on the 7″, and the video. Fenriz saluted us in Swedish magazine Close-Up and we became newcomers of the month in German Rock Hard Magazine. It just went on from there. The songs on the album do have a broader sound. Some tracks are a bit more Hellacopter’ish, and some sound more dark and heavy. But the guitar harmonies and face melting solos are still there.

Is DEAD LORD a band that wants to evolve from release to release, or did you this time around just try to do the sound that you created on your single to perfection?

– Sure. Not evolving is pointless. However we prefer to keep the music clean, with few overdubs and no modern soulless overworked productions. We want it to sound the way it sounds when we play live. That’s why we record live. On the album there are some songs written together and by the others in the band. Everyone bring their own flavor to the songs, and that’s great. It still sounds like DEAD LORD, though.

Did you write the material on the single at the same time as the songs on the new album, or are some of them fresher?

– Some songs weren’t even really done completely when we entered the studio. Some songs are older than those on the 7″.

Do you see some sort of progression from the single?

– Sure, they sound different. A bit bigger. Heck, you’ll probably be better off listening to it and judging for yourself, than reading about what I think. I always find it hard explaining what my own music sounds like.

The video for one of the songs on the single, “No Prayers Can Help You Now” is based on an idea which is so simple, someone must have thought of it and done something similar before. Where did you get the idea to do such a video? The cover of both your single and the new full length are kept very simple. The recording itself also seems a bit minimalistic, which makes me wonder if you kind of live by the saying “Less is more”?

– It was actually an idea we’d talked about in my old band. I guess the guys there thought it was too stupid to do, so I did it with DEAD LORD instead. It turned out great. We like simplicity, but not to the extent of dullness. As for productions, less is more. The same with album covers. A simple, good looking, clean cover will last with time better than an up to date/the latest fad-cover. Timelessness is the key! With live shows, guitar volume and awesomeness, however, more is more.

You recorded the album in a studio in Dublin. Is the choice of studio important for a band like DEAD LORD, or is your own equipment more important? Also, is the producer maybe more important than the studio?

– Gear is important. The wrong amp, and you’ll sound like a country player or a new wave metal kid. Much of the tone comes from the player, but still, having your own rig, is like having your own clothes. You’re you, and you can forget about it. I actually brought my ’72 Marshall Super Lead with me on the plane. Though a good amp is important, the right studio guy/producer/technician is even more important. You must have someone that you can trust fully. Ola, who recorded the album, almost feels like a band member. He understands completely what DEAD LORD is all about. He works in Sun Studios in Dublin, so we went there. It’s a great studio with the right gear. And it was nice to get away from home. So basically, I guess that it’s all important. But with the wrong
producer/engineer, no piece of gear in the world can save you. You’ll be
fucked.

– Well not sounding too modern is a good way to be timeless these days. Certain music styles seem to be more timeless than others. Regular nice Heavy Metal and Classic Rock, tend to be timeless, if done the right way. Another important thing to make the music sound “real” is to really do it from the heart. And believe in what you play. If you do that, people will hear it.

Both when I read about DEAD LORD, the way you record your music and also listen to the music, I am reminded a little bit about the Dutch band Vanderbuyst. They don’t spend too much time in the studio, they record the bass and drums live, and don’t have too many overdubs nor takes. Also they
are heavily inspired by seventies stuff. Do you know the band good enough to comment on this comparison?

– I actually don’t. But they seem cool.