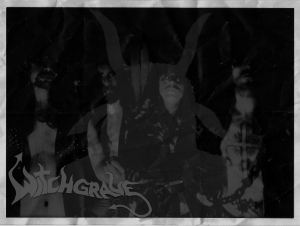 WITCHGRAVE’s first release was ”The Devil’s Night” back in 2010. I hooked up with Joakim Norberg to hear if it came as some sort of surprise when a high profile underground label like High Roller came knocking and wanted to put out what was basically a demo on vinyl?

– No, we were not surprised really but, we just thought it was cool. I still think it’s great, the songs are kind of simple and raw, and still it has a lot of atmosphere.

Is the material on “Witchgrave”, your new album, still written by you and Sven, or have the other musicians contributed as well? If so, have their input changed the end product in any way?

– We have all been involved in the writing process, so yes, the result will probably be a bit different, but in a good way. I think “Witchgrave” is much more varied, with more melodies and still harder and rawer.

Since your first release, which was basically recorded by the two of you, you seem to have established a band. Why did you decide to do this rather than to continue with the two of you using a professional studio?

– We decided that we wanted to play live and make it into something more than just a “project”. And since we had some guitar harmony-parts we needed to guitars so Gabbe and Tobbe joined the band.

All of you seem to be involved in other bands besides WITCHGRAVE.  How important and how different is Witchgrave compared to the other acts you are involved in?

– We haven’t discussed that really and as long as there are no problems there is no need to.

Apparently a couple of the songs on the new album were finished in the studio while recording the album. Is this because you work best with some outside pressure, or are most of your music made fast and easy?

– Most of the songs were finished before we entered the studio, it was just some lyrics and arrangements that we finished in the studio. I don’t really like to be in a rush when it comes to song writing but this time it worked out well.

My fave song on the album is probably “The Virgin Must Die”, which is very catchy, with an early NWOBHM-vibe. What are the basic ideas of this song, both musically and lyrically?

– It’s very hard to describe the idea behind a song, and I don’t want to analyze the music to much, because I think that’s up to the listener. Like with most of our songs the lyrics deal with darkness and death in some way.

The album shows a wide variety of influences. I don’t expect you to name them all, but am curious if you could name a few albums that have shaped the musical side of you that we can hear on “Witchgrave”.

– It would be impossible to name them all cause I think you can be influenced by something without even knowing it. But sure I can mention some bands that we have been listening to and probably been influenced by: Bulldozer, Venom, Warfare, Death SS, Mortuary Drape, Bathory, Celtic frost, Black Uniforms, Candlemass, Mercyful Fate, Diamond Head, Exciter, Blue Öyster Cult, Judas Priest and Black Sabbath.

In the song “Apparition” there is a little vocal part that reminds me of King Diamond, and my first thought was that it’s one of your producers’ Philip Svennefelt doing this part.  I know Philip from Portrait of course, but why did you choose him to produce your album? I didn’t even know he was a producer.

– Yes it’s him. He’s also doing some other vocal parts on the album but we forgot to write that on the album haha.  We heard some stuff that he recorded before and we liked it, and he shared the same ideas of how the music should sound, and it worked out really well. Philip is a crazy cat.

You have performed live in Norway a couple of times already, in Oslo as well as at the Til Dovre faller-festival. A few reports, especially from the festival, pointed to the fact that you had consumed…lets say a bit of alcohol. What is most important during a concert – to recreate what the listener hear on an album, or to get pissed, have fun and party with the audience?

– We try to be enough sober to be able to play but sometimes it gets a little too much.  There has to be some decadence when you play in a metal band. And from what I’ve heard most people liked the gig anyway so we don’t care too much.

The booklet of the CD-version of the new album made me smile, as it only contains song titles along with a list of High Roller-releases and some information about the compact disc-format that used to be in booklets during the eighties. Any particular reason why you did it this way?

– It was the record companys idea, cause we didn’t have anything else to but there and we thought it was cool.