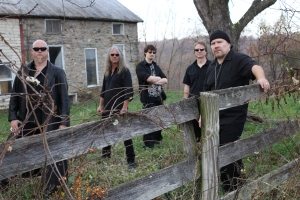 Since the band decided it was apropiate to include more or less all members, this edition of Short As Hell turned out to be a little longer than usual. Jeff (vocals), Billy (drums), both metal veterans with experience from cult acts like Omega Point and Tension, team up with guitarists Michael and Sean as well as bass player John to answer my questions.  First of all, when was ALLOY 20 formed? Have you had the same lineup all the way, or have you changed members?

Jeff:  – The band was formed in the summer of 2010. It was me, Billy, John and another guitar player who left soon after. He was replaced by Sean Taylor Brown and about 5 months after that Michael Ricketts joined and that finalized the lineup.

Do you see your first release “Part 1: Lost In The Veil Of Darkness” as a demo? Is the goal with this release to get a record deal, or will you continue to release your music on your own also in the future?

Billy:  – No, it’s not a demo. It is the first part of a two part release. We would be open to listening to offers from record companies, but for now, since we have our own private studio and the ability to put out our own records, we will continue to do so.

Releasing four songs instead of a full length, is that because you want to test the waters, or are these songs all you have at the moment?

Michael:  – We had four songs that we really loved and wanted to get out to the public. We did not want to make people wait for a full length album.

Billy: – We thought this would be a good idea because we will have a constant flow of new music coming out. We wanted to release Part I while we were in the process of recording Part II.

With a title like this, I guess we can probably expect a “Part II” as well?

John:  – The lyrics are very important which is why we prefer to include them in our releases.

Sean:  – Many of our songs at their base contain very dark subject matters and are usually presented in very abstract story formats that leave them open to interpretation by the listener. Many of the subjects and themes that made up the core of the songs on “Part: I” run the gamut. The record touches heavily on themes of war, the concept of the Apocalypse, and even debilitating illnesses like cancer and how these things have an effect on people. So far in the songwriting process for “Part II” we have been continuing with this idea of presentation. However, it will be focusing on other subject matters such as lying, addiction, and the death of heroes. Finally, there are some subjects we prefer to stay away from, the most prominent one being politics. We will probably never write a political statement song because we feel songs like that risk alienating people from the music, which is supposed to be an escape from such things, because modern politics have just become so insanely polarized in our country.

Jeff:  – Subjects are open to interpretation. I prefer to let the music inspire me to different stories that I try to translate dramatically, also leaving room for interpretation by the listener. We think you will be pleased with the new subject matter that we are addressing.

One thing that you obviously haven’t put that much effort into is the logo and the cover of the EP. Was there a particular reason for you wanting to keep it this simple, or was it a case of keeping the expenses to a minimum?

Billy: – We wanted to keep it very simple and let the music speak for itself. But don’t forget, there is a Part II coming, and things will evolve with each release.

When you first met Jeff, were you aware of his background and the fact that the Omega Point-demo is very highly regarded in underground circles?

John: – Jeff, Billy and I have known each other for over 20 years. I was completely unaware of Jeff’s success overseas.

Jeff: – John and I were in a small band together and actually, we rehearsed right down the street from where Billy’s band Tension/Deuce used to practice. Aside from John and myself, none of us ever played in the same band together until now. I was surprised to find out later that I was recognized in Europe.

Billy: – I have always regarded Jeff as a highly accomplished singer, but I didn’t know about Omega Point’s success abroad.

Michael: – My band, Snydly Crunch, played shows with Tension, so Billy and I have known each other for many years, but had not been in touch for a long time until the Alloy 20 project.

Sean: – I was in a far more unique situation, I knew very little about the guys and their other bands until I showed up for the audition. However, after I heard the guys play, I could tell right away that they were skilled musicians and became very interested in working with them. It wasn’t really until after I officially joined the band that I took the time to listen to the Omega Point and Tension stuff.

If there are already plans for a full length, can you say if the material on the EP will be used for such a release as well? It’s definitely strong enough to be used again, but bands should also be aware of the fact that most people who will buy a full length will probably already own the EP.

Michael:  – At this point, there are no plans for a full length album. Part II of Lost in the Veil of Darkness is currently in production.

Since the sound on the EP is really good, it seems you have the recording expertise in the band to record even a full length without involving an outside producer, or is this something that you will be likely to do even if you have members who can handle it?

Billy: – The EP was recorded at our private studio (Nocturnal Sound Studio), with the entire band involved in the production. Michael and Sean did a great job with the engineering. We would not rule out bringing in an outside producer in the future, but for now, we have been getting very positive feedback so we are happy to continue with the same process.

Listening to your demo brings back memories from both the eighties and bands like Queensrÿche and Crimson Glory as well as some of the so called prog. power-acts from the nineties. Are these bands and genres that you count as inspirations?

Jeff: – Yes, we are all fans of these bands, but we also like a lot of the new acts as well.

Sean: – Yes very much so. I am a rabid Power Metal fan! I draw a lot of heavy influence from acts like Blind Guardian, DIO, Stradivarius, and Rhapsody.

I am really impressed by the guitar work on the album. One cool thing is that both Sean and Michael seem to do solos and rhythm guitars. How do they compare to each other, and what are the secret behind what seems to be a great chemistry?

Michael: – Sean and I have radically different playing styles…old school meets new school. I am more of an early metal/blues player. My influences are players like Michael Schenker, Wolf Hoffmann and Gary Moore.

Sean: – I am more of a neoclassical player with influences such as Michael Angelo Batio, Yngwie Malmsteen, and I especially draw heavy influence from my guitar teacher, Matthew Mills who has been a powerful influence in regards to my involvement with the band. It has been an incredible experience having him play on the EP as well.

Michael: These differences allow us to cover more ground in the metal genre.

Sean: The drastic difference in playing style between Michael and I really seems to come together during the songwriting process. Although, we sound very different from each other, we usually have very similar visions on how our sounds will work together in each of the songs.

ALLOY 20 would like to thank Leif, Scream magazine and the fans for their support.