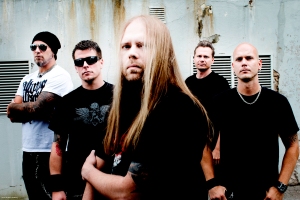 Even though I enjoyed the latest offerings by Swedish bands like Degial and Necrovation, I am not the biggest death metal fan around. Neither do I have the same knowledge of the genre as I have of those that I will mainly feature in this blog. What I do know though, is that Swedens EVOCATION is back with a brand new album called “Illusions Of Grandeur”, their first for Century Media.  A label well known for working with Swedish death metal bands. How important was this aspect for you?

–  It was very important both for the band and also for the energy within the band, to keep up a good vibe and create more quality music. We are very satisfied with the work Cyclone Empire did for us and Martin Purr was a gentleman in many ways and tried to, as much as he ever could to keep the whole circus moving forward. The contract with Cyclone came to an end and of course we wanted to see what other companines had to say. Century Media has always been around in some ways and the staff always treated us nice, so naturally there was not a second thought when they made an offer. The rooster at Century is amazing and the label is very strong and has always made good choices through all the years. It is time to write a new chapel and stop for nothing. This was once our dream and it finally happened. We have been working our asses of since 2006 and we were almost hitting the wall, now it feels like the energy is stronger than ever and we put a lot of trust into Century Media. Full speed ahead and stop for nothing, explains vocalist and bass player, Tjompe.

You had a long break from 1993 until 2006 when you made a new demo. Do you think Evocation would have sounded very different from what you do today, if you had stayed active for all those years?

-I really hope not!If we would have continued I am not so sure that we would have existed for many more years. Back then it was impossible to break through the thick wall of egoism and the wide range of influences. The promo cassette is a clear proof of a more non structured music and there was not that much self confidence in the writing and apperance process, the comunication was not 10% of what it is today. We lost our self´s a bit and it went out in sand. Perhaps the music would still sound raw and brutal but as I said before the wide range of influences was a big problem. I think if we would have continued on with “The Ancient Gate” style back then our life´s would look a whole lot different today. The first thing we said when we decied to do new material in 05/06 was that, back to the first demo and nothing less. This is Evocation and this is what we do best together. If you look upon what we have achieved in 6 years, 15 years later since the break up you could imagine how productive and stable the atmosphere would have been. 5 albums in 6 years, great festivals and tours with bands such as Cannibal Corpse, Dying Fetus, Obscura, Amon Amarth and The Black Dahlia Murder. The promo is still very good, but the only song that I stand up for is Veils Were Blown, I still think it’s a pure Evocation song and it is absolutely one of my personal favorites. I cannot give you a clear answer upon your quiestion but maybe our history was ment to be as it is today and it is just god damn wonderful. I really hope we would have sounded like we do but in the frontline instead.

I don’t have a lot of knowledge of what you have done in the past, but as I like the new album a lot, which of your previous ones should be the next on my list to check out? Is “Apocalyptic” the one that sounds most like “Illusions of Grandeur”?

– None of the other albums has this kinda structure and sound that much, but I think if you would ask Vesa, Marko and Janne they would say “Dead Calm Chaos”. If you ask me I would say perhaps “The Ancient Gate demo 92”. But I love “Apocalyptic” most of the previous ones, it’s a shame we could not have the same production on that one that we have on “Illusions”. Apocalyptic is the most heavy and raw we have done so far I think but nothin beats “Illusions of Grandeur” in its majestic/big performance.

There is a lot of melody in your songs. How do you work to balance this against the aggressive and heavy sound of a death metal band? Are there one or two bands that have inspired you when it comes to integrating melody into death metal?

– Well the melodies is Vesa´s ideas, I just have to fight my way half to insanity to make them sound as heavy as possible hahaha. The vocals and its structure are and will always be Thrash/Death metal as long as I am behind the microphone and Marko behind the rythm guitars. I think that me and Marko is more heavy and dark in our ways of thinking and Janne and Vesa more melodies, perhaps it’s a perfect match. Melodies is always a big and important part in Swedish death metal, it’s the perfect way to get that abyss, underground and darkness vibe to the whole. Some of the melodies that Vesa creates just hit my soul so strong. It is a magic feeling when my pen starts to write directly. Inspiraton has always been from Swedish bands, Marko and I have always been Stockholm and Janne and Vesa more to the Gothenburg style. Mixed together, you got Evocation.

If my information is right, there are no less than three bonus songs on the digipack version of the new album. None of these figure on my promo, so tell me a little about these tracks. Are they in the same style and from the same session as the others on the album?

– We´ve always saved one extra song from all albums except for “Tales from the Tomb”. From “Dead Calm Chaos” we have a song called “Dead without a Trace” and that song wrote Marko and me. It is a very heavy song with lots melancholia into it, oldschool but it differs a lot from the other songs. From “Apocalyptic” we have a real hit called “Dark Day Dawn”; it’s a mix between pure oldschool and perhaps a bit of the thrash legends Destruction and Kreator into it on the vocals 😉 It was the last song we recorded on that album and nowdays both me and Vesa claims its one of the best songs we ever did. From “Illusions” we saved one song called “Shades Of Shame” and I really don´t now what to tell you about it but if I say Evocation.

Johan Hegg from Amon Amarth is helping you out on one of the songs on the new album. Was there a particular reason that you wanted his voice on “Into Submission”, or could someone else have done it?

– Well, Johan Hegg´s voice speaks for its self. It is rusty, deep and god damn dark not many people can sing like that after so many years and still keep the right oldschool vibe, most singers tend to turn into ladies (Gothenburg singers) but Johan is so god damn Stockholm/England/US that you wet your pants. His way of writing is pretty much the same way I am thinking and he is one of the best frontman´s to be found in the whole world. He is the god of thunder, no doubt. We asked him and he said yes directly, we had a song that was perfect for him. I think our voices works out really fine together. Amon Amarth is not my own personal number one but Johan is top 10 no doubt. It was actually Marko´s idea from the beginning. The Evocation studio was almost shaking into dust when he started to work and that my friend…that is pure magic J